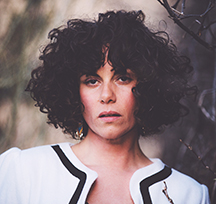 “All you gotta do is love me…” sings Janet Cull in that rich, earthy voice to open her debut solo album, Real Tough Love. But the subject matter of her debut is much like the artist herself… haunting, complex and beguiling. Rooted in the labours, the joys and the trials of adoration, this album has finally fully captured Janet Cull as truly dynamic artist. Real Tough Love examines our self-worth, our demands, the losses we are subjected to, and the losses we must choose. And through it all, it is Janet Cull’s voice that rings above all else. A voice that breathes, and sighs, yells and swoons from the very heart of these songs.

Since her record’s release in Fall 2016, Janet has received numerous accolades – most recently winning 3 MusicNL awards: FACTOR Album of the Year, Female Artist of the Year and Pop/Rock Artist of the Year. Janet was selected as Singer Universe’s Best Vocalist of the Month, and was the only Canadian winner (Vocal Performance category) of the 2017 Unsigned Only International Competition. Janet has also taken to the road in support of the record, with notable live performances in 2017 including opening slots for Grammy award winner k.d. lang, Juno-award winners Marianas Trench, as well as her own sold-out province-wide (Newfoundland and Labrdor, Canada) “Island Soul Tour”. 2018 will see Janet take her show (and album) further afield in Canada and beyond.

Janet Cull is one of Newfoundland’s (Canada) most prolific local artists. Cull has 2 previous award-winning albums to her credit. Janet performs regularly with Spirit of Newfoundland. Janet has performed in a variety of musical theatre as a principal singer/actor, and additionally toured regionally with the series of sold-out musical variety shows (“Lowe Profile”, “Women of Motown” etc) she has co-produced herself.